Imagine walking up to a news stand to pick up a paper, but instead of just picking up the paper and reading, a large bouncer stops you and gives you a test. If you can’t pass the test, you can’t pick up the paper to read. It’s a trivial test though, point out some obvious things in a photo. You do so and the bouncer hands you the paper. Later, you skip over to a different section of the paper and once again the bouncer stops you. While you are once again pointing out obvious items in a photo, you notice that another person walks up, and picks up the paper to read. No test, the bouncer just gives them a glance… but more than that, you noticed the bouncer watching them walk from the direction of a rich mostly white neighborhood, but if he notices someone walking from your neighborhood they too are stopped and given a test.

Later you leave the newstand, and walk up to a flower shop, yet again, another bouncer… and yet again, you notice him take note of which neighborhood you came from. This time, no test, no easily identifiable objects in a photo. Instead he says that people from your neighborhood aren’t allowed into the shop to make purchases, infact… he moves to blocks your view of the window. People from your neighborhood aren’t even allowed to look at the flowers inside the shop. Of course the people from the rich mostly white neighborhood walk in with out ever seeing the bouncer.

What sort of reaction would most people in the United States or a Europian country have if they discovered local shops using this sort of discrimination. What sort of outrage would be seen if your local florest chose to block anyone living in poor neighborhoods from even looking at their products?

Absured right? No one in their right mind would be so blatenly discriminitory. Nor would anyone tolarate this behaviour where we live. This is pure fantasy…

Except, it’s not. This is going on right now, day after day, but most of us live in that nice… rich mostly white neighborhood… The United States… or perhaps you live in one of the other similar neighborhoods, UK… EU… Australia…

Right now people around the world are discriminated against purely because of their geographical location, and companies who host with Google and use Cloudfair are requiring them to prove that they are worth allowing in. In some cases I have to wonder if the site manager even are aweare. While other companies, like 1-800-Flowers outright deny visitors from even viewing their products…All because of where those visitors live.

All of this of course is dismissed as a requirement to protect the webservers from hackers and fraud. This ignores the reality of where the majority of hackers, DDOS, and other malicious attacks originate… in the back yard of those rich mostly white neighborhoods.

This probably has something to do with the fact that, ignoring the difficulties of poor infrastructure, which cause countless power brownouts, spikes, and outages, the internet in most of the countries effected by these discriminitory practices costs outragious amounts of money for the average citizen.

Just as an example, in 2015 the internet in DRC which at best was 3G speeds over cell modems, costs $100 USD for 50GB of data, and $50 USD for 25GB of data… For many, it doesn’t sound to terrible right? Well this is the cost of internet in a country where the avarage monthly salary is $422 USD. While I was there, the government, in a likely attempt to prevent opposition supporters from uploading the videos of the violance caused by police, and avoid universal condemnation for cutting off the internet entirely (again) they decided to raise the taxes on the Internet. Math wasn’t their strong suit apparently, because they raised it 1000% making that 50GB package $1000 USD. After other members of the government objected, the tax was lowered… allowing the prices to settle back down to $100 but now that only bought 25GB of data.

It should be needless to say that this technological landscape is not condusive to being a prime launching point for technilogical attacks. Additionally, it highlights the use of these discriminatory practices actually harm the users of the internet in those countries by way of wasting their precious internet data on downloading and displaying frivolous cpachas.

The top country to launch cyber attacks? The United States. That’s right, that neighborhood who gets a free pass to all websites? Home to 34% of web application attack traffic during the 1st quarter of 2017 according to Statists. 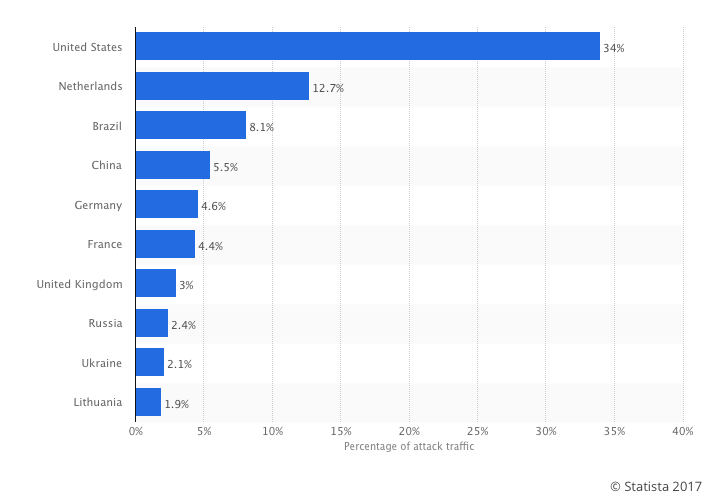 Infact of the top 10 in their list, not a single one is in Sub-Sahara Africa… Yet nearly every country in the region is subjected to this treatment.

People champion an open internet in the UK and US… But for the rest of the world, it’s already dead.